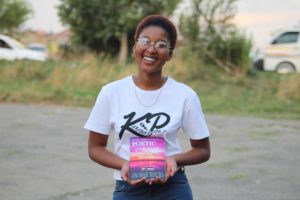 Difateng-Karabo Digasho (18) was bristling with excitement after her debut poetry book was published. Aptly titled Poetic Minds Combined, the book showcases poetry by different writers. The Tembisa gifted wordsmith, also popularly known as Karabo The Poet, couldn’t contain her excitement when her name was printed on the front cover.

The Combined 2nd edition was published by author and founder, Charles Kgabo (also known as CharlesHoby) under his publishing company called Ava’s publishers (Pty) Ltd. Born and raised in Polokwane, Kgabo graduated with an engineering qualification and is currently completing a degree in psychology with UNISA. In2018 Kgabo was featured in two international anthologies, the Evergreen Poetry Journaland New London anthology.

In 2020 he became one of the authors of a poetry collection called Mercy and Poetic Healingwhich features poets across different countries such as Canada, India, Nigeria, and Zimbabwe. He was the only author representing South Africa. As a beacon of hope and an inspiration to many upcoming poets in the country, it’s no surprise that many budding writers needed Kgabo’s help to get published. And Karabo The Poet was one of them. With 6 moving poems, Karabo rightly occupies the first pages of the book. According to the young energetic writer, Kgabo has done the impossible for her career.“Poetic Minds Combined is a South African anthology that features poets from a different province inSouth Africa. The book comprises of almost all 11 official languages in South Africa,” said Karabo.