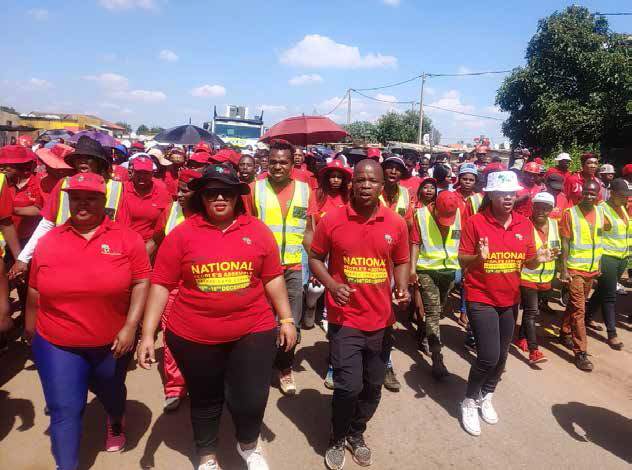 Keletso Hollo is a community leader in the Winnie Mandela section. On the 7 February 2020 she was part of the community march aiming to address the poor conditions at Tembisa hospital. “Our march was very peaceful. There were no reported cases of theft,” Hollo told The Olifants.

She says the memorandum was accepted by the Head of Intergovernmental Affairs, Mr Thokozani Langa. Grievances on the memorandum include: the immediate resignation of the CEO of the hospital, the immediate resignation of the Nursing Manager accused of sexual harassment, the reinstatement of nurses that were transferred to other hospitals without their knowledge.

Furthermore, they want the government to open the Kempton Park hospital to the community of Winnie Mandela.

“When you are a community leader people come and ask for your assistance especially when management is not doing anything about issues,” says Hollo. She says people are frustrated while others are even depressed by the situation at Tembisa Hospital.

A Nursing Manager is accused by staff nurses of sexually harassing them. “When the nurses report those cases to their management nothing is done,” says Hollo. “Instead the nursing manager is threatening the nurses. Some of those nurses were transferred to other hospitals without their knowledge.” All the reported cases happened last year just before the festive holidays.

She says they couldn’t march then because most people were travelling home for the holidays.

The other issue is that of poor infrastructure at the hospital. “For instance, some of the windows cannot close while others are covered with plastics. There is also a shortage of beds. There was a patient who delivered on the floor. And the other woman delivered on her own, she didn’t get any medical assistance afterwards. The baby was severely affected by this and milestones such as walking were delayed,” says Hollo.