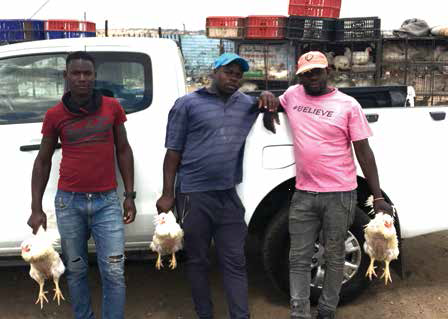 The love for chicken by the South African public has led to a boom in the sale of live birds in the street corners of densely populated townships.

Many entrepreneurs have taken advantage of the nation’s love for crunchy succulent chicken to start business empires from selling meat from farms directly to customers in the streets. Kept in cages along the road the fowls are picked by customers for prices ranging from R60 to R100 depending on size.

Eggs are also available as these township entrepreneurs ply their trade in the streets. The phenomenon is not just in South Africa, Chicken and eggs are a rich source of animal protein for millions of Africans.

The young population, who make up more than 70 percent of the continent’s people are the highest consumers of poultry products. Africa’s poultry market is experiencing a boom as a result of its rapid population and economic growth. “I did not go to college to get an education and when the chips were down I said what the heck let me join the budding troop of entrepreneurs selling chickens in the street,” says Jonnah Sibindi, who started his street corner business in 2015. Sibindi now employs six people.

“We source ready to slaughter chickens from Boer farms in surrounding provinces. Sometimes we have to travel as far as KwaZulu Natal to get stock to meet the demand,” he says. Sibindi has also been able to buy a van and extend his house from the spoils of the business.

His van is certified to carry 500 chickens and he resells about 2000 chickens a month. “I use the van as a courier transport for other chicken re-sellers within surrounding communities. I have a chicken pan at home where the chickens are safely kept and fed. It also doubles as a storeroom to restock the corner street -shop, should the need arise,” Sibindi says. He admits that crime is one of the biggest threats to the business as the chicken pan is on occasion broken into.

He adds that he has already lost two vans from thugs. Mantlako Mailula also agrees that there are vast opportunities in the trade, but points out that entrepreneurs must be smart about it. “Poultry meat production may have opportunities for local entrepreneurs, but people must know that there is tough competition from cheap imports. Whilst those who are tactful are able to make decent earnings this is a risky business. Entrepreneurs are advised to also look for guaranteed niche markets or exclusive supply contracts,” he says. Meanwhile, Lungile Dube, from Kagiso, said as live chicken vendors they were thrown in a state of panic when government recently announced that there would be a countrywide ban on the sale of live poultry in a bid to contain an outbreak of the highly contagious bird flu.

The issue of the ban arose after the highly pathogenic avian influenza H5N8 was confirmed in a broiler breeder site in Mpumalanga in June. H5N8 is a rapidly spreading viral disease that can infect many types of birds and it is highly contagious. It exists naturally in many birds and can be transmitted by coming into contact with infected animals or through ingestion of infected food or water. “We were in despair about what to do with our stock. We rely on this business to make a living. However, we get by,” she said.